I’m thrilled to announce that the cover has been revealed for Jaye Erro‘s short stories anthology! Officially titled Unmasked and Other Stories, this unlikely mix of short stories comes together in themes of growing up, finding yourself, and most of all — hope. Written by young authors, it features:

And now for the cover! 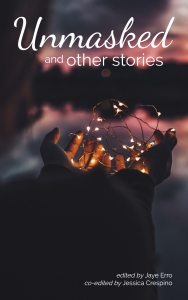 I’m so excited for this anthology to be released! Not only will it contain my first published work, “Unmasked”, but 100% of profits goes toward Sheaves for Christ charity, which supports foreign missionaries, houses homeless children, and more.

Let me hear from you! In the comments, tell me your favorite genre to read, and I’ll tell you which story in Erro’s anthology you may like best. What do you appreciate in a story?

What are you doing to give yourself something to look forward to?
"Remember, remember the fifth of November..."
📖 "My name's Emery. Mind if I sit here?"
Happy #BookBirthday to #Unmaskedandotherstories! 🎉 2 posts in 1 day is a little out of the norm for me, I know, but this book birthday just wasn't complete without cake. (And stay tuned - I've got something I'm so excited to share with you tomorrow!) But seriously - how has it been a year already??
What's something you love/miss about your school years?
Hello everyone! I was tagged for the #5bookchallenge by @beneath_the_desk_drawer.